Blog
Virginia, the Data Center Capital of the World, is now at the Confluence of Five Continents Vinay Nagpal Subtel Forum MAY 24, 2018

Northern Virginia is currently the leading data center market in the world, and the data center development in the region is showing no signs of slowing down. Loudoun County in particular clearly takes the lead in all data center markets globally; however, Prince William County, Henrico County and Hampton Roads—are regions coming up as well in the commonwealth of Virginia. Data Centers contribute over $180M annually in revenue to the Loudoun County every year. There are over 3,000 technology companies housed in the Loudoun County data centers. The tax incentives in the county include a sales and use tax exemption on servers, generators, chillers and server equipment. For those of you not familiar with Loudoun County’s location, it is located about 25 miles (40 kms) from nation’s capital, and about 25 minutes from the scenic farmland in Virginia. Loudoun County is #1 in median household income in the US, and #1 in business growth in Virginia (according to SmartAsset, 2017).

“Got data? Loudoun County does. Lots of it. With its expansive fiber networks and a swarm of tech
workers, it’s a major traffic hub on the East Coast.”
CNN Money

Over the last two decades of so, Ashburn has clearly made its mark on the Internet Infrastructure industry. It is indeed the leading data center market in the world – if you go by numbers, with over 75 data centers, 10M sq. ft. of operating data center capacity, over 1 GW (1000 MW) with another 4.5M sq. ft. under development. Just to put things in perspective, 1 MW can power one single-family home, so that is enough to power 1000 single family homes. Dominion Energy has done a phenomenal job of being a fantastic partner of the data center community. In addition to constantly adding capacity, they have various renewable energy programs in place as well for the data center community to take advantage of.

Northern Virginia boasts a technically skilled workforce. Huge presence of government technology contracting companies has also contributed to this pool of talented workers. Data Center operators are continuing their buildouts at a rapid pace. Increasing investments in building new and upgrading existing data centers that support the provision of Cloud services is among the main drivers of growth. Other drivers of the data center forecast include growing use of Big Data analytics, Internet of Things (IoT) technology and a growing need for data center colocation and managed services. Embracing of technologies like Virtual Reality, video, social media, banking is also leading to more data generation and data consumption.

Connectivity is a extremely vital component of the data center business model. It is pretty simple – whatever data comes in to the data center, must go out. The data may be brought in on 18-wheelers trucks with cabinets full of servers, with servers full of data, but it must go out over fiber optic cables, that comprises of thin strands of fiber glass. Each of these strands of fiber glass is thinner than human hair, but have immense capacity to carry data. With the latest DWDM technology, each fiber pair can support up to 200 channels with each channel capable of carrying up to 100 Gbps traffic. So effectively you can send up to 20,000 Gbps or 20 Tbps of data over one fiber pair.

It is believed that over 70% of the world’s Internet traffic passes through Loudoun County. There are several hundred networks present in this region on which traffic is changing hands, in order to get to its final destination in the most optimum path. Loudoun County boasts the most interconnected location in the north east, and is also home to several Internet Exchanges, that enable multiple parties to connect with each other and exchange traffic. Northern Virginia is where the first commercial exchange was born called MAE-East (Metropolitan Area Exchange) by Metropolitan Fiber Systems (MFS) in Tysons Corner in 1992. Since then several connectivity-centric companies have made a mark in the Northern Virginia landscape including UUNET, PSINet, AOL, Equinix, to name a few.

Terrestrial fiber construction has continued perpetually over the last two decades or so; you constantly see fiber splice trucks, and road being dug whererein new conduit systems and terrestrial fiber optic cables are being installed underneath and beside the public roads. Recently we have seen the installation of 3,456 strand fiber cable systems installed in the Northern Virginia region. The region boasts some of the country’s most fiber dense roads and several of nation’s carriers are in this region as depicted in this image (courtesy of NEFiber).

According to Cisco’s Visual Network Index, the level of global data traffic is expected to reach 3.3 zettabytes by 2021 and almost every byte touches a subsea cable as cloud service providers, network service providers, content providers and enterprises push to move data globally in real time. Subsea cables are responsible for $10 Trillion in transactions every day. The rapid growth of data, from the very basic web browsing and e-commerce to streaming of video and Artificial Intelligence, is helping drive a global resurgence in new subsea cable systems. Twenty new subsea cables will launch in 2018 alone, with capacity of ~700 TB (vs. just six launched in 2016). Total subsea cable bandwidth is expected to double by 2021, and it is growing at 40% CAGR globally. Additionally, there are several subsea cables across the Atlantic are reaching EOL (typical lifespan of a subsea cable system is 25 years), therefore new replacement cable systems are planned.

The state of Virginia has recently received it’s share of new subsea cables. Until recently, in order for the international Internet traffic to leave the state of Virginia and reach its destination in other parts of the world had to be first sent to the state of NY, NJ or FL. This is because the “landing stations” where the subsea fiber systems terminate existing only in these three states in the eastern seaboard of United States. This changed in 2017 – with the state of Virginia getting it’s first subsea cable MAREA connecting Bilabao Spain to Virginia Beach. This system is jointly owned by Microsoft, Facebook and Telxius, and boasts highest capacity fiber link between US and Europe at 160 Tbps on a eight fiber-pair system.

The second subsea cable coming to Virginia, BRUSA is expected to be completed later this year connecting the state of Virginia directly to Puerto Rico San Jaun and Fortaleza and Rio de Janeiro Brazil. Theses direct international connections will further give the data center community in Virginia more connectivity options for low-latency fast connection to various international destinations. This system is wholly owned by Telxius and will offer one of the lowest latency communication links between two of the largest economies in the region between the US and Brazil.

Recently, a third new subsea cable, SAEx (South Atlantic Express) cable was announced connecting Cape Town in South Africa to Virginia Beach, a distance of approximately 13,050 kms. This will be the first direct connection from South Africa to the US, and it will have a capacity of 72 Tbps. This system will have branching units in Saint Helena, Ascension and in Fortaleza, Brazil. SAEx is expected to bring 200 high-tech jobs to Virginia Beach. SAEx will further extend connectivity to Asia in Phase-II of it’s deployment. It will be the first system to connect the eastern shore of South Africa to the western shore of South Africa.

There are several over subsea fiber projects under consideration for Virginia Beach. A new Subsea Ecosystem is quickly evolving in Virginia Beach. This ecosystem is starting to take shape with the new subsea cables that are acting as a catalyst of driving additional terrestrial fiber, and could eventually lead to content-centric providers such as CDNs, Internet Exchanges, and other eye-ball networks to interconnect at the edge, as depicted in the graphic below.

In summary, the Commonwealth of Virginia has attracted data centers and connectivity providers from all over the country, and also from other parts of the world. Every major data center provider (retail or wholesale), every major Cloud provider, every major terrestrial fiber connectivity provider is in Northern Virginia, and now with the new Subsea cables landing on the Virginian shoreline, it will further strengthen the position of Commonwealth of Virginia as a major data center and connectivity hub globally, a state truly at the Confluence of five continents – North America, South America, Europe, Africa and Asia. 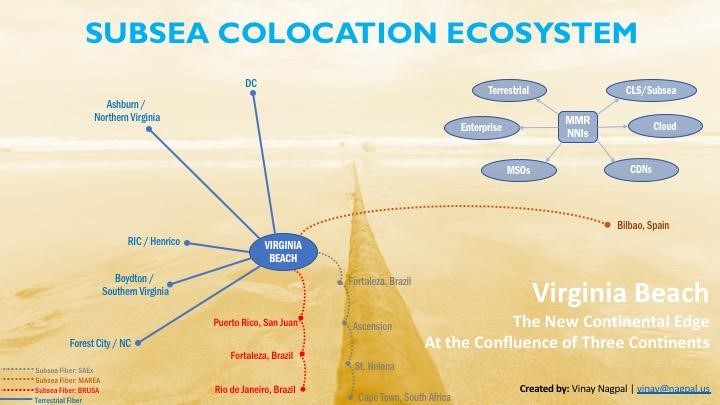 Vinay has over 23 years of global experience developing data center and connectivity solutions with a strong knowledge of Subsea and Terrestrial fiber systems.

Vinay has served on Open-IX board, leading the formation of standards for distributed Internet Exchanges, and also led the Marketing Committee of Open-IX Association.